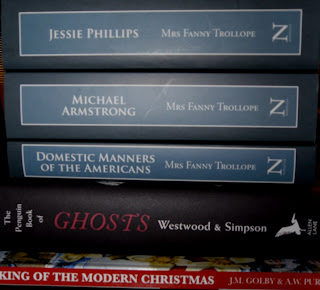 It's a grey, rainy day in Melbourne. Hard to believe that last weekend it was warm, sunny, spring weather. Today has been a return to winter. I love the rain so I'm not complaining, it's just confusing. It's my day off &  Abby was due to go to the vet for her flu injection & to have her nails clipped. I don't know how she knew that this was on the agenda but, instead of settling down on the couch this morning after breakfast for a good long sleep (which is what she does every other morning of the year), she decided to go outside through the rain & under the back steps to huddle in the damp & cold instead. So, I had to go outside, through the rain & crawl under the back steps to get her when it was time for her appointment. I'm sure she's psychic. I hadn't even got the cat carrier out of the cupboard. 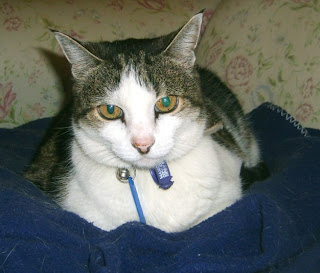 Look at her. Butter wouldn't melt in her mouth, but she knows what she wants & a visit to the vet is never on her list of favourite treats.

I've had a bit of a book splurge lately. I have a lovely pile of books from the Book Depository, including some long-awaited preorders, but I'll wait until they've all arrived before sharing those. I also ordered some books from my favourite remainders bookshop, Clouston & Hall, & they arrived earlier this week. I haven't read any Fanny Trollope but she was a very well-regarded novelist in her day so I couldn't resist these Nonsuch Classics editions of two of her novels, Michael Armstrong, the Factory Boy & Jessie Phillips as well as her scandalous book about her trip to America, Domestic Manners of the Americans. This book was banned in the US for many years as the Americans were incensed at her portrait of them. Of course, it was also a bestseller in Britain! Michael Armstrong was one of the first of the Condition of England novels published in the 1840s to draw attention to the plight of workers in the industrial factories. Other more famous novels include Hard Times by Dickens & North & South by Elizabeth Gaskell.

The Penguin Book of Ghosts by Westwood & Simpson is a series of extracts from their much larger book, The Lore of the Land. I have a copy of this but it's very large & very heavy & very awkward to hold up with Abby on my lap, which is how most of my reading is done. I love English ghost stories whether fiction or, like these, legends about real places. This is a much better size for comfortable reading. It's times like this that I'm tempted by an e-book reader. I'm also very interested in the origin of the Christmas customs that have evolved over the centuries. The Making of the Modern Christmas by J M Golby & A W Perdue is a beautifully illustrated book about these customs. From mistletoe & the Christian appropriation of a lot of pagan customs to the Victorian Christmas & Christmas through the 20th century, it's all here.

I'm in one of those states of reading restlessness at the moment. I've finished another Wodehouse novel last night, A Pelican at Blandings, & I'll review that tomorrow. I'm halfway through The Sorrows of Young Werther with my 19th century book group & I'm listening to the last CD of Henrietta Howard by Tracy Borman which I reviewed here at the halfway mark. I'm about to start a group read in weekly instalments of The Tenant of Wildfell Hall with my online reading group. So, what to start next?

I've just picked up Gladys Mitchell's When Last I Died. Gladys is being reprinted by Vintage & I reviewed one of these elegant new reprints, The Saltmarsh Murders, earlier this year. Although I had some reservations about the book, I enjoyed it & want to read more. The rain has put me in the mood for an English murder, so I'm off to make settle down with Gladys, Abby & a cup of tea.
Posted by lyn at 4:11 PM