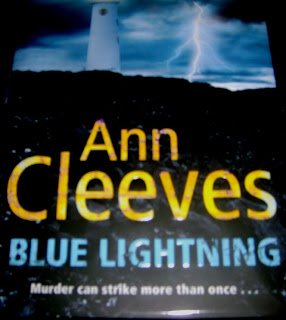 I must be the last mystery fan in the world to have caught up with Ann Cleeves’ Shetland Quartet and even now, I’ve started at the end. I’d been aware of the books & I’d even picked up one of the earlier books in the series but it wasn’t the right time & I put it down again & went on to something else. Well, after reading Blue Lightning I have to read the earlier books as soon as possible & probably anything else by Ann Cleeves that I can get my hands on! Blue Lightning is in the great Golden Age tradition of the locked room mystery & the Shetland Islands are a wonderfully atmospheric setting. Detective Jimmy Perez is on his way to his parents’ home on Fair Isle with his fiancé, Fran. Jimmy would like to make his home on Fair Isle, where he grew up, but Fran is still unsure about moving herself & her daughter to such a remote place. Fair Isle is the location of a bird observatory run by Maurice & Angela Moore. Angela is the ranger, a beautiful, commanding woman who has presented TV documentaries & is famous for her discoveries. Maurice is much older, an academic who left his job when his relationship with Angela broke up his marriage & alienated his children. His daughter, Poppy, is reluctantly visiting the island but obviously resents being there. Jane Latimer has escaped an unhappy personal life to be the cook/housekeeper at the observatory, catering for the regular staff & the birdwatchers who come to observe some of Britain’s rarest species. Jimmy & Fran arrive as a spell of bad weather cuts the island off from the mainland. When Angela is found murdered, stabbed in the back at her desk with feathers strewn over her, Jimmy has to investigate without any of the usual backup or forensic support. The suspects all have something to hide & the investigation brings out the obsessive, competitive nature of twitching. These people are so obsessed with being the one to stop the next rare bird that Angela’s death is seen as more of an inconvenience than a tragedy. Angela had plenty of secrets of her own & once Jimmy is able to get his team to the island, the investigation spreads further afield & uncovers several juicy motives. This is a terrific book full of atmosphere, compelling characters & an intelligent detective. It’s been a while since I found a new mystery writer but I can’t wait to read the rest of the Shetland Quartet. I hope this isn’t the last we’ll see of Jimmy Perez even though the Quartet is finished. Ann Cleeves has written an interesting piece on the origins of the story on Martin Edwards’s blog here & Martin has also reviewed Blue Lightning here. I recommend it to anyone who enjoys British mysteries & all I can say is what took me so long?
Posted by lyn at 7:37 PM