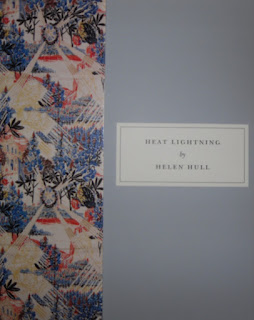 All the moments since she had come to Flemington had been working toward that decision, hadn't they? Not a conclusion arrived at coldly, by balancing advantages; a necessity which was left after the agitation of the week had broken up her dull and apathetic surface. It was queer to feel more alive because of death and fear and hatred; perhaps intense feeling was a kind of electric disturbance in which old sluggishness and stupidity were consumed. Heat lightning, revealing flashes in a murky summer night.

Amy Norton returns to her childhood home in a small town in Michigan. She lives in New York with her husband, Geoffrey, & two children but she's at a crossroads in her life & her marriage & she runs away, back to her family. The week that she spends in her parents' house takes her away from her problems but also plunges her into the life she's left behind. Her father, Alfred, runs the family business, a factory that is struggling to survive in these days of the Great Depression. Amy's grandmother, Madam Westover, lives next door, presiding over the family, controlling & pulling the strings of her extended family. She has a few surprises to spring on them but is she as in control as she thinks? Amy's uncle, Dewitt, is in financial trouble & expects Alfred to help out yet again, straining their relationship. Aunt Lora, long since divorced from her philandering husband, irritates her children, discontented Harriet, lazy Tom & Laurence, happily married to Emma & totally absorbed in their family life. Amy's brother, Theodore & his French wife, Felice, are the most contented of all, more contented than sister Mary, who has just given birth to her fourth daughter & discontentedly grumbles about being left out of family life while her devoted but spineless husband, Henry, attempts to find a job. At the centre of the story is Amy's calm, nurturing mother, Catherine.

Amy discovers that her family is the same as when she was a girl but also different. Her grandmother is older but still indomitable, refusing to let age & the relentless summer heat stop her going about her usual routines. However, Dewitt's demands for money & Tom's reliance on his grandmother or any other member of the family bailing him out of trouble, are taking their toll. Amy is drawn in to everyone's problems from Tom's dalliance with her parent's maid, Lulu, to Mary's whining about Henry's bad luck in job hunting & her father's worries about the business (Mary reminded me so much of Mary Musgrove in Persuasion). Amy sees them all with an outsider's eye, all the time wrestling with her own problems, her fears that Geoffrey is having an affair or has left her altogether. She discovers a new respect & love for her parents who have a  beautifully supportive & loving relationship, the most satisfactory relationship in the novel. I love the scene when Amy & her mother talk about what's important in life,

"What is important?" Amy kept her arm around her mother's shoulders; in her mother's tone, in the acceleration of her speech, she felt a desire to communicate fully and quickly, as a fending off of approaching departure.
"To me, now, just two things. Your values alter so, as you grow older. You let go of lots of things you struggle at first to get.... Well -" she sighed, and swung open a secret door - "one is acting so I don't feel ashamed of myself, so I feel comfortable with myself. Sometimes I'm driven into saying or doing things I know I'm going to be ashamed of. The other - that's people. Loving them. Loving them enough, now, so you feel alive. Not a general vague love for everybody. That's nonsense. But for your special ones." The color lay bright on her cheekbones, her eyebrows lifted into the little triangle of concentration above her delicate nose. "I can't explain any better."
Amy was silent; words with rude breath might blur the surface of the treasure her mother exhibited so diffidently. With a shrug Catherine moved away from Amy's arm, swinging fast shut the secret door.

This is such a wonderful novel. I don't know how Persephone keep discovering books that are so essentially Persephone books. The latest Persephone Quarterly compares Heat Lightning to Dorothy Whipple's novels & I would have to agree. Both authors write books that are unputdownable. This is a completely absorbing family saga. The cast of characters is large but they're so well-developed & distinct that the helpful list of characters at the front of the book isn't needed for very long. The atmosphere of small town life with all its gossipy lack of privacy is portrayed so exactly. You would think there would be no secrets left in this community but there are several surprises for the Westovers that leave them rethinking their relationships & their place in the world. The oppressive heat weighs everyone down, even a rainstorm can't lighten the atmosphere for long. Amy's week in Michigan reveals her family to her in a new light & she realises that her problems are no different & no more important than those of the rest of her family.

On a purely aesthetic note, Heat Lightning is such a beautifully presented book. I think we've all become a little blasé about the beauty of Persephone Books & we don't always stop & notice their uniqueness in an age of cheap paperbacks & digital editions which may be convenient but don't feed the booklover's soul in quite the same way. I especially love the Persephones that reproduce the typeface of the original edition as this does. The endpapers (you can see them reproduced on the bookmark above) from a roller-printed silk fabric of 1929 have a feeling of heat haze about them. So, Heat Lightning is an absorbing novel in a beautiful package & I can't recommend it too highly.
Posted by lyn at 2:56 AM