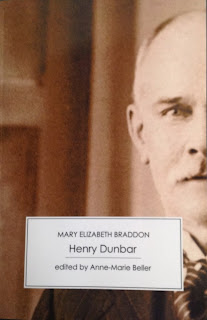 It's been too long since I read a good sensation novel. So, when I was asked to nominate a book for my 19th century bookgroup, I had a look at the tbr shelves & chose Henry Dunbar. I have the Victorian Secrets edition which has, as always, an informative Introduction, notes & contemporary reviews.

Mary Elizabeth Braddon is probably not as well-known now as her great contemporary Wilkie Collins. but in her day she was incredibly popular. Her most famous novel, Lady Audley's Secret, featured a villain who challenged every convention  of the period. She was blonde, beautiful & completely ruthless. She also wrote an enormous number of novels & short stories, very few of them still in print. So, it's great to see this edition of Henry Dunbar.

Henry is a young army officer, spoilt & indulged. He's also the heir to an important London banking house, Dunbar, Dunbar & Balderby. He gets into debt & entices a young clerk at the bank, Joseph Wilmot, who has a facility for copying handwriting, to help him create forged bonds to hold off his creditors. The fraud is discovered & Henry, after being forced to resign his commission, is sent out to the company's India office in disgrace. Joseph Wilmot is dismissed without a character when Henry refuses to speak up for him.

Thirty-five years later, Henry Dunbar is coming home. His father & uncle are dead & he's now the senior partner of Dunbar, Dunbar & Balderby. Henry had married in India although his wife is now dead & his young daughter, Laura, was sent back to England to live with her indulgent grandfather. She hasn't seen her father since she was a small child. Joseph Wilmot was unable to get a respectable position without a reference, fell into bad company & was transported to Norfolk Island for fraud. His older brother, Sampson, still works at the bank but hasn't heard from Joseph for over twenty years & assumes that he's dead. Joseph, however, is not dead. He has returned from the colonies & now calls himself James Wentworth. His life has been blighted by that first mistake & he has suffered from the convict stain,  always having to move on when his past life is revealed. He lives with his daughter, Margaret, who teaches music for a living. She knows there's a great grief in her father's life but has no idea of his past.

Sampson Wilmot is sent to meet Henry Dunbar off the boat at Southampton. Joseph Wilmot has seen the announcement of Dunbar's return & finally tells Margaret that he is the man who has ruined her father's life. He sets off to London to confront Dunbar but, on the way, sees his brother & follows him to Southampton. Sampson is agitated by the reappearance of his long-lost brother & suffers a stroke, allowing Joseph to take his place as the welcoming party for Henry Dunbar.

Dunbar hasn't changed or been chastened by his years in India. He is as arrogant as ever &, when Joseph confronts him, offers him an annuity as compensation. The two men travel to Winchester on their way to London to visit an old friend of Dunbar's, apparently on good terms. When they arrive, they discover that Dunbar's friend is dead so they visit the cathedral & Dunbar decides to call on his friend's widow. The two men set off arm in arm to walk by the riverbank but only one man, Henry Dunbar, returns. He tells the verger at the cathedral that he had sent Joseph on ahead to take a message to the widow but he doesn't return. Then, Joseph Wilmot's body is found by the river bank, his clothes stripped away. At the inquest, Dunbar is closely questioned but, even though there are discrepancies in the time he said he left Wilmot, nothing can be proved against him. He travels on to London, to a subdued reunion with his daughter. Dunbar retreats to his family estate in the country, Maudesley Abbey, with Laura & soon gains a reputation for standoffish eccentricity. Laura is baffled by her inability to get close to her father but is distracted by her love affair with the young baronet, Sir Philip Jocelyn.

Margaret is distraught when her father doesn't return from London &, as she has no idea of his real name, she doesn't know of the murder in Winchester. She goes on with her teaching & meets Clement Austin, a young man who works at the Dunbar bank & is looking for a music teacher for his niece, newly arrived to live with him & his mother. Clement meets Margaret, engages her to teach his niece, & falls in love with her. Gradually, they discover the reason for Joseph Wilmot's disappearance & Margaret is determined to confront Henry Dunbar & accuse him of her father's murder. Henry Dunbar proves very elusive, refusing to see Margaret & Clement becomes determined to discover the truth about the murder.

In some ways, Henry Dunbar is a murder mystery but not as we would consider it. The reader knows much more than any of the characters & the excitement is in seeing how they will gradually discover the truth. Even though I thought I knew what was happening, Braddon is clever enough to throw doubt on the reader's conjectures so that, at times, I wasn't sure if I'd read the clues correctly. It's a very exciting story with a police inspector (employed privately by Clement Austin) leading the chase for the murderer on the railways & even onto the seas.

Braddon may have been unconventional in her plots but her heroines bear no comparison to Wilkie Collins's complex women. Laura & Margaret are beautiful, good & pure. Margaret's principles are such that she dismisses Clement when she discovers her father's true past & it takes all his persistence to track her down. Nevertheless, this is a story with lots of action - I haven't even mentioned the blackmailer & the diamonds -  & an exciting use of the modern marvel of the railways (it was published in 1864 but set principally in the 1840s). Braddon's writing is very atmospheric & I loved her descriptions of Winchester & Maudesley Abbey. If you love sensation fiction, I'd recommend Henry Dunbar.
Posted by lyn at 2:11 AM