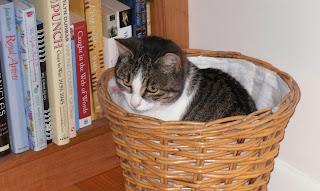 Happy New Year everyone, another year begins. I hope it will be a year full of health, happiness & plenty of good books for us all. This photo isn't especially about New Year but Phoebe is sitting in the wastepaper basket (one of her favourite spots in the study although right now she's on my lap) in front of unread books which is a theme of this post.

I counted up my list of books read for 2013 & I read 115 books last year which is good but not as good as 2009 when I read 172! I know I spend more time on the internet than I did a few years ago as I now have an iPad which makes it easy to look something up from the comfort of my chair without having to start up the PC & disturb a sleeping cat on my lap. However, it also makes it too easy to be led from one thing to another & suddenly discover that half an hour has gone.

I want to read more books from my tbr shelves this year, which is a perennial resolution, I know. But, I'd like to make some sort of a dent in the shelves. I seem to collect books from my favourite publishers but then read very few of them. I don't want to be too structured as I'm not a big fan of reading challenges or being too prescriptive. I'd just like to read more of all these lovely books.

Wodehouse & Slightly Foxed editions. I bought all these Wodehouses from Clouston & Hall when they were remaindered & I'm slowly making my way through them. I subscribe to the excellent quarterly journal, Slightly Foxed, & also to their series of memoirs in these beautiful pocket-sized hardbacks. I've also subscribed to their new Slightly Foxed Cubs, the children's historical novels of Ronald Welch - even more to read! 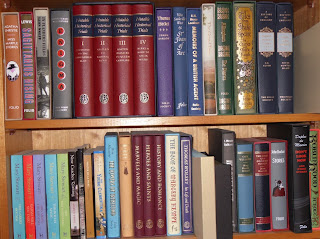 The Folio Society (along with some Mary Stewarts, a Walter De La Mare & a D E Stevenson). 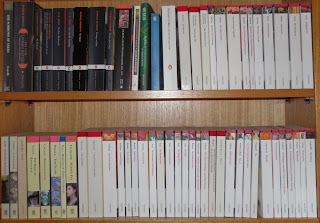 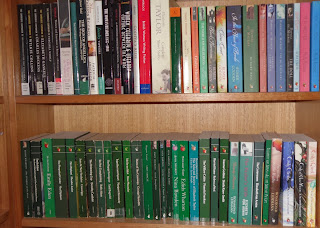 Virago (as well as some books on mostly women's literature. You can see by the spine labels that I rescued a few of these from my library when they were being withdrawn). 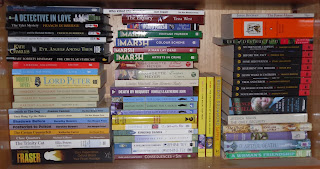 I also have other tbr shelves organised by subject like this overflowing shelf of  mostly mysteries.
Some are rereads - Marsh, Fraser, Heyer, Tey - but I really do want to read them again so I haven't shelved them on the main shelves. I also picked up that stack of Arcturus Crime Classics from Clouston & Hall a few months ago. 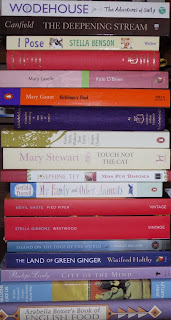 Finally, this is the stack of books on my desk which is meant to indicate that these books are next to be read... I won't tell you how long some of them have been sitting there. The 6th book from the top does deserve special mention, though. Mary Gaunt's Kirkham's Find was republished by Penguin as part of a wonderful series of reprints of Australian women's novels. They were published in the bicentenary year of white settlement in Australia. For those of you who don't know when that was, it was in 1988. The book hasn't been sitting on the desk that long but I did buy it that year so it probably rates as my oldest tbr book. I must read it! It has one of my favourite paintings on the cover, Clara Southern's An Old Bee Farm, & this is definitely the year I will read it.

So, more reading from the tbr shelves (I haven't even mentioned library books or ebooks but they don't take up nearly as much room) & I have a resolution about blogging too. I'd gotten into the habit of posting two reviews a week as well as a poem on Sunday & I'm starting to feel a little constrained by the schedule I've set myself. I think it's stopping me from picking up longer books unless I'm reading them in installments with a reading group because I want to post those two reviews a week. I also subscribe to some lovely magazines & journals which I want to actually read rather than just pile on the coffee table. So, I will try to be less structured this year & post more serendipitously & not worry if there are no posts some weeks because I'm reading Trollope or a big biography. I may put up more cat pictures if the girls are in the mood to pose or photos of my veggie garden which is looking wonderful at the moment - green tomatoes on every plant & the promise of an awful lot of pumpkins (I only have one plant which is taking over the garden, how many do they produce??).

So, that's it. My reading resolutions for the year, such as they are. I'll look forward to hearing about everyone else's resolutions, if you make them, & reading some wonderful books in 2014.