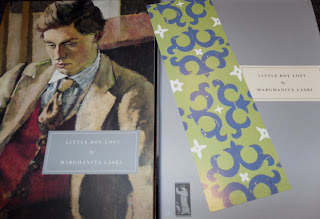 I had planned to review one of my favourite Persephones as part of Persephone Reading Week as well as read a new one. Well, I’m going to have to cheat a bit as I’ve started Penelope Mortimer’s Daddy’s gone a-hunting but I just don’t think I’m going to finish it before the week is up. I’ve had a really busy week & I’ve been falling asleep over my book with Abby on my lap early every night this week. So, I’m just reviewing my favourite Persephone. Little Boy Lost is one of my top 5 Persephones. Don’t ask me what the others are because they change! At this moment, the list would be Little Boy Lost, Few Eggs & No Oranges, Fidelity, They Were Sisters & A House in the Country. Ask me in a month’s time & they would be different but Little Boy Lost & one of the Dorothy Whipples would always be there. I’ve read all of these more than once & they really sum up for me what Persephone is about & why I love their books. Compulsively readable, with characters the reader cares about, full of domestic details about houses, clothes, relationships, the way they lived then.


Little Boy Lost is the story of a man's search for his son, lost in France during WWII. On a deeper level, it is the story of a man's search for himself, rediscovering his capacity for love after the experiences of war. Hilary Wainwright saw his son John just once, the day after he was born in Paris. Hilary's wife Lisa was working for the Resistance and was captured and killed by the Gestapo when John was a baby, and the child disappeared. After the war, Hilary is contacted by Pierre, a friend of Lisa's, with news of a child who may be John. Hilary sets out to find this child. His search takes him through the devastated French countryside to the small town where the child lives in an orphanage. Hilary's growing relationship with little Jean (the name given to the child) is very moving. Hilary's resistance to love, to being hurt again is vividly portrayed. Jean is a delightful child, a representative of the many thousands of children left orphaned and lost by war. The reader longs for these two lost souls to fall into each other's arms. By the end of the novel, I didn't care whether Jean was Hilary's son or not. The unsentimental yet deeply moving style of the novel is totally engrossing, once started, I could hardly bear to put it down.

I love the fact that Persephone’s books about WWII were written at the time or shortly after. This gives them such immediacy, especially in the books written in the middle of the war. The outcome was unknown & the experience of living in Britain with all the uncertainty that comes from war makes these books compelling. Little Boy Lost takes the reader to a France devastated by years of occupation. The countryside is blighted. People are trying to rebuild their lives. So many families have been shattered. This is a book about hope, the hope that maybe one family can be put back together again & move forward into a better future. Little Boy Lost should be read once very quickly to find out what happens to Hilary & Jean & then, read it again slowly & admire the way Laski has written this lovely novel.
Posted by lyn at 7:49 PM