No Signposts in the Sea - Vita Sackville-West 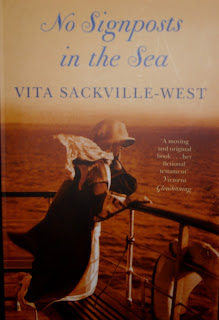 It’s Virago Reading Week, hosted by BookSnob & A Few of my Favourite Books. It was a good opportunity to have a look at the Virago Modern Classics on the tbr shelves & I chose Vita Sackville-West’s last novel, No Signposts in the Sea. Sackville-West is probably best known as a writer for her beautifully elegiac novel, All Passion Spent (also a VMC), & as a woman, as the lover of Virginia Woolf & the inspiration for her novel, Orlando.

No Signposts in the Sea is the story of Edmund Carr, a political journalist, who is told that he only has a few months to live. Edmund has been quite a solitary man. He has worked his way up from humble beginnings to a position of some power & influence. He has never married & has had fleeting, almost impersonal affairs with women who were never allowed to get too close. At the time that he discovers he is ill, he realises that he is in love with Laura Drysdale, a widow in her late 30s. Edmund & Laura move in the same social circles but have never been close. When Edmund discovers that Laura is about to take a Pacific cruise, he decided to spend his last months on the same cruise, as close to Laura as possible.

Edmund & Laura’s relationship grows closer as they spend time together on the ship & on various excursions at the ports they visit. They discuss their different ideas of marriage. Edmund learns a lot about Laura’s marriage & her ideas about the perfect relationship, but gives little away himself. He becomes intensely jealous of another passenger, Colonel Dalrymple, who is interested in Laura. Edmund & Laura go to a native market & are nearly caught up in a riot. The highlight of the trip is their overnight stay in a villa loaned to them by a stranger they meet in a port city,

I suppose I anticipated a luxurious villa with a cocktail bar in the drawing-room and carved wooden figures of Negroes holding electric lights. It was, on the contrary, simple to the point of austerity, with white-washed walls, red-tiled floors, large arm-chairs of rattan, and plain serviceable furniture of a peasant type. From the entrance hall and up the staircase drifted the scent of burning joss-sticks and that was the Orient, but in the same hall a door stood open on to a purely Spanish patio with pots of camellias standing about, and a little fountain splashing into a basin.

Edmund’s thoughts & feelings swing from intense happiness & contentment in his love for Laura & equally intense misery & jealousy. Laura is more enigmatic and, of course, we don’t hear her thoughts as we do Edmund’s. The book is an interior monologue & the reader becomes quite as involved in Edmund’s feelings as he is himself.

The Introduction to this edition by Victoria Glendinning was very interesting. As usual, I read the Introduction after I’d read the book. Sackville-West was very ill herself when she wrote the book although her illness had not been diagnosed. She loved cruises & spent several months every year with her husband, Harold Nicolson, cruising the Mediterranean, the Pacific or the West Indies. The cruise in the novel is based on one Sackville-West took in 1959 to India, Ceylon, Singapore, Manila, Saigon & Yokohama. Glendinning sees the book as an expression of Vita’s opinions & thoughts about love, marriage & relationships. Vita & Harold had an open marriage, both had heterosexual & homosexual affairs. Through Edmund & Laura, Vita described her idea of an ideal relationship. Mutual respect, independence, separate bedrooms & the same sense of values. Fidelity is important but it’s more important to avoid hurting the other person. Anyone who knows about Vita’s life & her own marriage can see that these are very close to her own views.

When I started the book, I found it hard to work out when it was set. It felt like the 1920s, I suppose the cruise ship setting made it feel very Twenties, until I came across references to WWII. It was written in the early 60s. In a way, it’s quite timeless. It could just as easily take place in the 19th century or the Edwardian period because it’s a book about emotions & the interior life more than events & the outside world. No Signposts in the Sea is a book where very little happens but it’s an absorbing study of emotions sharpened by the knowledge that life is finite. Edmund has to decide in the end whether he should take the risk of telling Laura of his love.
Posted by lyn at 12:15 PM