A Question of Identity - Susan Hill 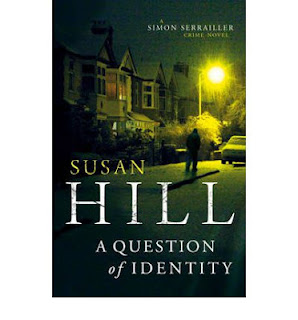 Is it sacrilegious to admit that I don't read Susan Hill's Simon Serailler novels for the murder plots anymore? Maybe it's because Hill has a long & distinguished career as a novelist rather than a genre novelist that I find the atmosphere of the cathedral city of Lafferton & especially the family dynamics of Simon & his family so much more absorbing than the mystery & the investigation.

In the latest novel, A Question of Identity, I may have lost interest in the murder plot because I felt I knew who the murderer was from very early on & for once, I was right. One of the characters just never rang true from the moment they were introduced & I just knew that I'd found the murderer. I'd read Audrey's post at Books as Food & I can see that Audrey feels as I do. The family relationships have become more compelling. I don't see this as a reason to stop reading the series. After all, Simon is a policeman. If he abandoned his job & concentrated on his art, the books wouldn't be nearly as interesting. But then, I'm afraid I find Simon the least interesting member of the Serrailler family. I loved the early books when his mother was alive & I find the female characters so much more interesting than Simon & his tentative, tortured relationships.

I suppose I should mention the detective plot at some point though. Elderly women living in sheltered accommodation are being murdered. The murderer has no trouble entering the houses, he doesn't sexually assault his victims or steal anything. He arranges the women in a chair facing a mirror & strangles them. Eventually a link is made to a similar series of murders that took place some years earlier. The novel opens with the court case that led to the acquittal of the suspect in these murders. Alan Keyes disappeared after the trial & was never heard of again. Police were sure he was guilty but his defence lawyers had been able to throw doubt on an eyewitness's testimony. Once the connection is made to this earlier case, Serrailler & his team are chasing a phantom. Keyes has been given a new identity & they have few clues to go on & get no help from the authorities. They set up an elaborate sting that helps them to find the killer.

While all this is going on, life in the Serrailler family is as complicated as ever. Simon is in love with Rachel, who loves him in return but isn't free. Her husband is dying &, although he has given their relationship his blessing, she feels the guilt & strain of the situation. Simon's sister, Cat, is struggling to cope as a single parent after the death of her husband. Her teenage son, Sam, is uncommunicative & silent. Her daughter, Hannah, is excited about the possibility of acting in a film. Molly, a medical student who lives with the family & helps with the children, is struggling to cope with the events of the last book, The Betrayal of Trust, when her life was at risk. Cat is also concerned about the future of her work as a doctor at a local hospice. The financial future of the hospice is in doubt & Cat feels undermined by the Board as she tries to ensure that its valuable work can continue.

Simon & Cat's father, Richard, has always been a taciturn, difficult man. His second wife, Judith, has made a difference to all their lives &, after some initial resentment, Simon has grown to love her. Richard & Judith's relationship appears very rocky & Judith's refusal to confide in Cat is another source of concern.

All this family drama is fascinating & it's what kept me reading the novel. I'll look forward to Susan Hill's next Simon Serrailler novel for the continuation of the Serrailler family saga above all.
Posted by lyn at 12:41 PM