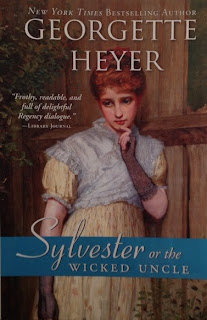 Sylvester, Duke of Salford has everything. Rank, wealth, good looks & pleasing manners. When he decides that it's time he married, he has a shortlist of suitable candidates. He's obviously not in love with any of these young women & doesn't see love as a necessary prerequisite to marriage. Salford's invalid mother worries that he has become arrogant & unfeeling. She had hoped that he might marry the daughter of her greatest friend, Verena Marlow. Verena died when her daughter, Phoebe, was only a few weeks old & she now lives with her father & his second family. Phoebe's grandmother, Lady Ingham, had given Phoebe a Season in London but it wasn't a great success. Salford's heir is his nephew, Edmund, son of his twin brother, Harry, who died young & a flibbertigibbet called Ianthe. Sylvester & Ianthe loathe each other & another motive for his marriage would be to encourage Ianthe to leave Edmund in the care of him & his wife when she marries foppish Sir Nugent Fotherby.

Phoebe Marlow is an intelligent young woman living miserably at home with a cold, uncaring stepmother. Her greatest friend is Tom Orde, son of the local Squire & her greatest love & interest is horses. She has literary aspirations & has written a novel using her experiences during the Season. She modeled her villain, Ugolino, on Salford, after dancing with him once & then being ignored by him at another party. Without knowing any of his personal circumstances, she made Ugolino a wicked uncle who has usurped his brother's place & kidnaps his nephew. The novel is about to be published anonymously with the help of Phoebe's governess Miss Battery.

Salford decides to please his mother by meeting Phoebe (he has no memory of their previous meeting) & is invited to stay by Lord Marlow. Phoebe is horrified at the thought of Salford making her an offer & persuades Tom Orde to help her get to London to see her grandmother. Unfortunately, the weather is dreadful & their carriage overturns in the middle of nowhere. Salford, returning home after Phoebe's flight, discovers the runaways at a country inn & helps them out of their predicament. Tom has broken his leg & Phoebe's reputation needs saving so, after a week snowed in at the inn, he sends her on to London. Their growing friendship is almost derailed when Phoebe's novel, The Lost Heir, is published & her authorship is soon revealed. Phoebe is horrified when she learns that she has unwittingly caused gossip as her book becomes the sensation of the season even while she is ostracised by the most respectable people. She had never expected silly Ianthe to take the novel as a true story, seeing herself as the heroine needing to save her son from the evil influence of his uncle. More than one misunderstanding has to be sorted out before we can get to the happy ending.

This is such a delightful book. It's a breathless read with so much happening that I couldn't bear to put it down. Phoebe is headstrong, thoughtless but also vulnerable. She's grown up knowing that she's of very little account in her family. Her father is ineffectual & her stepmother unfeeling. Only her half-sister Susan & Miss Battery, make her life bearable. Sylvester doesn't suffer fools gladly. He has always been deferred to yet has a strong sense of duty. He loved his brother & was devastated when he died. He puts up with Ianthe & really loves young Edmund so he's determined that he be brought up properly. Phoebe's horror at the thought of marrying him takes him by surprise but their growing friendship & his growing love for Phoebe surprises him. The minor characters, from Tom Orde to lady Ingham & Salford's servant, Keighley, are beautifully written. It's been too long since I read a Georgette Heyer & I'm glad I have several more on the tbr shelves.
Posted by lyn at 1:31 AM