Moby-Dick or The Whale - Herman Melville 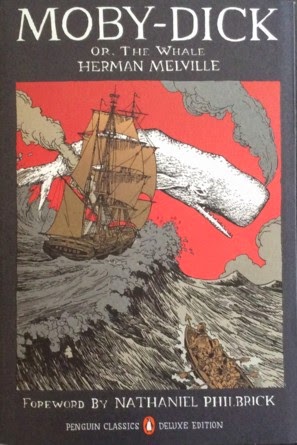 How can I possibly write about Moby-Dick? It's such a famous story but also one of those classics that I've always been daunted by. I've had a copy on my tbr shelves for several years now. Then, I bought another copy, this beautiful Penguin Deluxe Classics edition. I'd heard how difficult the book was, how elusive the language, how monumental the digressions. Finally, I borrowed the audio book from our e-library. Listening to William Hootkins' wonderful reading of Moby-Dick made me fall in love with the story & for the last six weeks, I've been listening to one of the most exciting, engaging & funny books I've ever read.

The story is well-known. Ishmael, a young man tired of working on merchant vessels, decides to give whaling a try. Arriving on Nantucket Island, he meets harpooneer Queequeg, a tattooed Pacific Islander, the son of a High Chief, with cannibal tendencies who worships an idol called Yojo. They are taken on by the owners of the Pequod, & are not deterred even when they are warned about the odd behaviour of the captain of the vessel, Ahab. They don't see much of Ahab during the fitting out of the Pequod but they meet the other mates, Starbuck, Stubb & Flask, & the rest of the crew, men from all over the world. It's not until they're at sea that the captain emerges from his cabin.

Captain Ahab has his own reasons for undertaking the voyage to the whale hunting grounds & it has nothing to do with procuring precious whale oil for the boat's owners. Ahab has lost his leg to the great white whale, Moby-Dick, & has sworn revenge. His obsession with Moby-Dick has become madness & he incites the crew's greed by nailing a gold doubloon to the mast with the promise that the man who kills Moby-Dick will have the coin as his prize. The Pequod sails from Nantucket to South America, round the Cape of Good Hope to South-East Asia & Japan. Whales are chased, caught & slaughtered but Ahab's only question to the other boats they encounter is "Hast thou seen the white whale?" Nothing else matters but his revenge & they sail towards the encounter with Moby-Dick that is the climax of Ishmael's story.

No mere retelling of the plot can give an idea of the flavour of this book. The language is heightened, convoluted, Biblical in cadence. Here's Captain Ahab telling the crew about Moby-Dick,

"Aye, Starbuck; aye, my hearties all round; it was Moby-Dick that dismasted me; Moby-Dick that brought me to this dead stump I stand on now. Aye, aye," he shouted with a terrific, loud, animal sob, like that of a heart-stricken moose; "Aye, aye! it was that accursed white whale that razeed me; made a poor pegging lubber of me for ever and a day!" Then tossing both arms, with measureless imprecations he shouted out: "Aye, aye! and I'll chase him round Good Hope, and round the Horn, and round the Norway Maelstrom, and round perdition's flames before I give him up. And this is what ye have shipped for, men! to chase that white whale on both sides of land, and over all sides of earth, till he spouts black blood and rolls fin out. What say ye, men, will ye splice hands on it, now? I think ye do look brave."

Ishmael's narration is intimate & confiding. The long passages about the history of the whale & the whaling trade, the detailed descriptions of hunting, harpooning & catching whales are exciting if also a bit mind-numbing at times. When Ishmael describes the sperm whale's head, he takes several chapters to do it as well as describing every variety of whale & disputing the stories told of whales by every historical writer from the Bible & Aristotle to Beale & Bennett. But then, there are the tales of other ships that Ishmael tells along the way & the many funny incidents such as Ishmael's first meeting with Queequeg when he is terrified of sharing a room with a cannibal but ends up sitting up in bed with him confiding their life stories to each other as the best of friends. Or Stubb's determination to have a steak from the first whale they catch & making old Fleece the cook preach to the sharks scavenging on the gigantic corpse of the whale as it floats by the side of the ship because his steak was badly cooked & tough.

There are also some reflective moments of great beauty as when the Pequod comes across a pod of whales protecting the females & their calves,

But far beneath this wondrous world upon the surface, another and still stranger world met our eyes as we gazed over the side. For, suspended in those watery vaults, floated the forms of the nursing mothers of the whales, and those that by their enormous girth seemed shortly to become mothers. The lake, as I have hinted, was to a considerable depth exceedingly transparent; and as human infants while suckling will calmly and fixedly gaze away from the breast, as if leading two different lives at then time; and while yet drawing mortal nourishment, be still spiritually feasting upon some unearthly reminiscence;- even so did the young of these whales seem looking up towards us, but not at us, as if we were but a bit of Gulf-weed in their new-born sight.

William Hootkins' narration won an Audie award in 2006 & it's a wonderful performance. He contrasts Ishmael's lightheartedness at the beginning of the story with the more serious passages describing whales & explaining every aspect of the whale hunt. Ahab's mad mutterings build to a crescendo as he becomes more obsessed with his hunt for the white whale & his monomania puts everyone's lives at risk. I usually listen to audio books in the car on the way to & from work but I was listening to this one when I was ironing, cooking & any other time I could find. It was the perfect way to get in to this mythic story & I'm so glad that I finally read it.
Posted by lyn at 2:14 AM