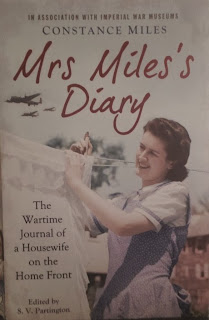 Constance Miles was a housewife living in Shere, a village near Guildford in Surrey, during WWII. She was a writer who came from a literary family. Her father was William Robertson Nicoll, founder of the periodicals The Bookman & British Weekly. Constance was in her late 50s when the War began. Married to Elystan Miles, known as Robin, in 1909, they had two sons, Harry & Basil. Robin served in the Royal Artillery during WWI &, after he resigned his commission, they owned a chicken farm in the 20s. Robin loved an outdoor life & one of the themes of Connie's diary is Robin building an air raid shelter or pottering about, gardening & fixing things. They moved to Shere in 1928 & bought a large house which they divided in two, living upstairs & letting the lower floor to tenants. Connie's writing was always important to her, whether it was the reviews & articles she wrote to supplement Robin's army pension or the diary she began to keep in August 1939. The diary stops briefly in April 1941 as paper rationing had began & Connie seems to have become discouraged by the progress of the war.

Not too much to eat; our income tax about to drain our pockets; life docked of happy travel and happy meetings, the necessary machinery of a million households cracking. Girls of twenty conscripted - what a chaotic business; its humorous side apparent to every woman, and to no man.

The diary resumes, however, eight months later & continues through to 1943. Connie donated a copy of her diary to the Imperial War Museum in 1947 and in the letter that accompanies the donation she writes, "May it be of use some day!". In recent years there has been several diaries written by "ordinary" women published or reprinted. Best known are the diaries of Nella Last which were written for the Mass Observation organization. My favourite would be Vere Hodgson's Few Eggs and No Oranges, reprinted some years ago by Persephone. Vere is so bubbly & unflappable. She worked as a social worker in Notting Hill & kept her spirits high during the Blitz even while walking past piles or rubble from the last raid after yet another sleepless night.

Connie Miles lived an ordinary life and that's the value of her diary. It begins in the period of the phoney war, when nothing really seemed to be happening. Mothers & children were being evacuated from London for fear of raids & Connie describes the arrival of the evacuees & the fear that their downstairs flat would be commandeered for the newcomers. Later on, it's the ARP who threaten to take it over.  There is lots of information here about the effects of the war on a small community. Rationing was naturally a huge concern & what was available & how to get hold of it was a constant source of speculation.

The fishman was very scornful when I asked if he had any fish below one and sixpence a pound today. Cod was two shillings a pound. Imagine being in his power! It was take it or leave it, and you're damned lucky if you secure a piece of anything. Finally I got enough for one person for one-and-fourpence, fresh haddock, and also a little bit of cat's fish as a tremendous favour.
February 8, 1940

Robin wanted to be doing something for the war effort but all his offers to help in training the Home Guard were rejected. He was constantly frustrated that his efforts to teach (when they were accepted) were met by apathy by his students. Robin's tart comments are an expression of his frustration but he was obviously annoyed by what he saw as the lackadaisical attitude of many on the Home Front who weren't taking the possibility of invasion very seriously.

Connie's son, Harry, was invalided out of the Army due to ankylosing spondylitis ( a bone disease) & eventually went out to Rhodesia to work on his uncle's tobacco farm. Basil was a doctor & joined the Royal Army Medical Corps. He was badly wounded in North Africa at El Alamein but survived to return home. Connie also had friends in London & in the US whose letters kept her up to date with events far away. One of her friends was Barbara Bowers, better known as Barbara Euphan Todd,who wrote the Worzel Gummidge books & Miss Ranskill Comes Home, reprinted by Persephone. Another close friend, May Browne (later Sinclair), worked for the BBC.

As always, the interest I have in reading diaries of the Home Front is in the juxtaposition of everyday life & the big events of politics & war. Connie's diary is fascinating reading and although my favourite WWII diarists are still Vere Hodgson with her optimism & poor nervy Nella Last with her impossible husband & endless contriving with food, Connie's diary is full of gems like this that portray life as it was during those years.

I was aghast at being asked on the telephone this morning to become Billeting Officer - I am considering it; as there are 8-900 children in the village it would be no sinecure.
Went to London. Coming down in a crowded carriage with two men standing, a Canadian soldier turned on his small wireless set and the whole packed carriage listened gravely to a fairy story from the Children's Hour about Grimalkin. So English were we, we made no sort of response or comment, or thanked the Canadian. But I suspect we all enjoyed it, jogging through snow-covered fields. Returned much elated, and gave Robin the gift of an apricot tart. Tried not to think about Malaya and the increasing danger there.
January 13, 1942
Posted by lyn at 1:13 AM