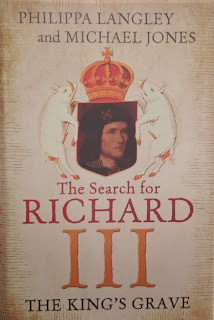 The discovery of the grave of Richard III in the church of the Greyfriars in Leicester has been the story of the decade for those of us interested in history & archaeology. For those of us who are members of The Richard III Society, it's been an exciting time as we followed the Looking for Richard project every step of the way through regular updates from the Society as well as following the newspapers, blogs & websites speculating about the identity of the remains. Since February, when the remains found in the grave in the Social Services car park in Leicester (formerly the Church of the Greyfriars), were formally identified as being those of Richard III, the last English king to die in battle, the interest & attention has been intense. The current legal fight by a group called the Plantagenet Alliance (collateral descendants of Richard's family) to overturn the plans to bury Richard in Leicester Cathedral means that Richard III has barely been out of the headlines for over a year.

The Looking for Richard project was the passion of Philippa Langley, a screenwriter who became interested in Richard III, joined the Society & then became obsessed with finding his grave. Traditional stories described the hasty burial of the king after his death at the battle of Bosworth, the erection of an alabaster tomb over the grave ten years later (paid for by the victor of Bosworth, Henry VII), the destruction of the Church of the Greyfriars at the time of the Dissolution of the Monasteries in the 1530s & Richard's remains being thrown into the river Soar while his coffin was used as a horse trough at a local pub. Langley's research led her to doubt most of the traditional narrative & she became determined to find Richard's grave & ensure that he was given a dignified reburial in consecrated ground.

Other members of the Richard III Society supported her quest, including Annette Carson, author of Richard III : the maligned king & John Ashdown-Hill, whose research into the location of the Greyfriars Church as well as the DNA profile of Richard would prove crucial in proving that the remains discovered during the dig were, beyond doubt, those of Richard III. The King's Grave is Langley's account of her quest, from the spooky moment when she stood in the Leicester car park & felt that she was literally standing on Richard's grave to the long period of gathering funding for an archaeological dig (including an eleventh hour international appeal to the members of the Richard III Society to contribute when crucial funding was lost) to persuading Richard Buckley & the University of Leicester of the validity of her research & through the two week dig itself & the media storm that followed. Searches for named individuals are rarely undertaken by archaeologists & they are rarely successful. To find the right person in the right place with only a few trenches dug & on the first day of a two week dig was amazing - a million to one chance indeed.

I was surprised how suspenseful this was, especially as I knew the outcome & I'd followed the whole process as closely as was possible from the other side of the world. I've also seen the documentary The King in the Car Park that was filmed during the dig & read everything I could find from newspaper reports, the very informative Ricardian Bulletins & the scholarly articles that have been published so far. Langley's emotional highs & lows are vividly relived. Skeletal remains were discovered in the first trench dug on the very first day & she was immediately convinced that Richard had been found. Although she respected the archaeologist's desire for context & evidence, her belief never wavered. She was proved right as the skeleton was excavated & the damage to the skull & the curvature of the spine were revealed.  The Carbon 14 dating later placed the remains at the right historical period & the DNA research confirmed Richard's identity by matching his DNA with that of two descendants. The scene where she sees the skeleton displayed in a lab & listens to the professionals describing the extent of the scoliosis of the spine & the brutality of the battle wounds is very moving. This was one of the most powerful scenes in the documentary, as well.

Alternate chapters of The King's Grave have been written by historian Michael Jones. Jones fills in the background on Richard's life & times & discusses the main controversies of the reign - how & why Richard took the throne & the fate of the Princes in the Tower. Jones believes that Richard feared that his rule as Protector would not last long once Edward V was crowned & he feared for his future when the young King's Woodville relations resumed their influence over events. He believes that it was the discovery of a plot to rescue the Princes from the Tower that forced Richard's hand & led to him ordering their deaths. Philippa Langley doesn't agree with this interpretation & there's an Appendix that sets out the arguments for & against Richard's involvement in their disappearance. The alternate chapters work well in heightening the suspense of the dig & the scientific tests afterwards as well as filling in the background for readers who are not familiar with Richard's life.

The King's Grave is an excellent account of the search for Richard III & a useful introduction to his life. It's the perfect taster for the many scholarly articles that will follow & the research that will result into the man & this most controversial period of English history.
Posted by lyn at 1:56 AM