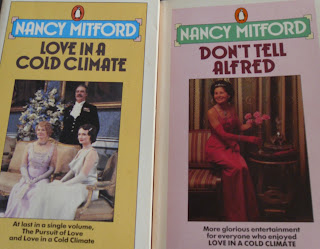 Don’t tell Alfred is narrated by Fanny – narrator of Love in a Cold Climate & The Pursuit of Love & daughter of the Bolter, a woman who has been married so many times Fanny can't keep track. It’s set 20 years after the other books. Fanny has been happily married to Alfred, Oxford don of Pastoral Theology, for all this time but life is about to become more interesting when Alfred is appointed Ambassador in Paris.

Fanny is apprehensive as she’s never been a particularly stylish or successful don’s wife, definitely not one of the Dior set in Oxford as she calls them. She suffers from weak ankles & has caught the awful modern habit of kissing everyone as a greeting so she has visions of herself falling down the steps at a solemn ceremony at the Arc de Triomphe, extinguishing the Eternal Flame in the process & then kissing the President of the Republic instead of properly shaking hands. Fanny is relieved to discover that Philip Cliffe-Musgrave, a former pupil of Alfred’s & now a devoted friend, will be there to guide her through some of the pitfalls of diplomatic life, but she will also need a social secretary. Unfortunately, instead of her plain, intelligent & sensible niece, Jean McKenzie, she ends up with Jean’s hopelessly disorganized & silly sister, Northey. Northey is beautiful & soon has all the Ministers in the French Government falling in love with her, but, as a social secretary, she’s useless. Her eyes are constantly brimming with tears & she’s so soft-hearted about animals that she takes the lobsters that were a gift from a Minister & undiplomatically releases them back into the sea.

Some of the characters from earlier books make an appearance. The book opens with Fanny visiting Uncle Matthew in London & discovering that he has fallen on his feet after leaving the family home to his son’s family. He has a devoted manservant, Payne, who looks after him between doing his real job as a taxi driver, & he has discovered a fondness for cocktail parties. He can go along & have a drink & still be home in reasonable time for dinner & bed. Grace & Charles-Edouard Valhubert from The Blessing are part of the social scene in Paris & Grace advises Fanny on clothes & flowers & is still devotedly in love with her husband.

There are some very funny scenes. The previous Ambassadress, Lady Leone, is devastated when she has to leave Paris & simply refuses to leave the Embassy. She moves into another wing of the building & becomes the social success of the season. Fanny & Alfred sit in the official residence alone while Lady Leone holds uproarious parties in another part of the house. It takes Fanny’s Uncle Davey to find a solution to that problem. Then there’s the poisonous gossip columnist, Amyas Mockbar, whose left-leaning newspaper is violently anti-Alfred & writes scandalous lies about Alfred. As Alfred never reads the Daily Post, he’s oblivious to the slurs but Fanny reads all the papers & is devastated by each column.

Fanny’s children are another constant source of worry. Basil has decided to be a travel agent. He takes up with the Bolter’s latest husband & they run Grandad’s Tours, herding English tourists through Spain & France. David turns up one day with a pregnant wife & adopted Chinese baby & announces that he is now a Zen Buddhist & is on his way to the East. The younger boys, Charlie & Fabrice (son of Fanny’s cousin Linda whose story was told in The Pursuit of Love), team up with Sigi Valhubert at Eton & decide to leave school & manage a pop star.Nancy Mitford is very funny about society & Don’t tell Alfred is very much in the same vein as The Blessing. Fanny is a sympathetic heroine & it’s fun to meet up with favourite characters from the previous books. Mitford's love of Paris is also evident in some lovely descriptions of Paris through the seasons.

Penguin have just reprinted lots of Mitford but my copy is one I bought many years ago when Love in a Cold Climate was made into a TV series with Judi Dench & Vivien Pickles. I’ve just bought Wigs on the Green & I’ve ordered Capuchin Classics new edition of Highland Fling, so this is going to be a year of reading the Mitfords. I also have Nancy’s biography of Mme de Pompadour, Laura Thompson’s biography of Nancy & Jessica’s letters on the tbr shelves so I have plenty to go on with.
Posted by lyn at 11:35 AM