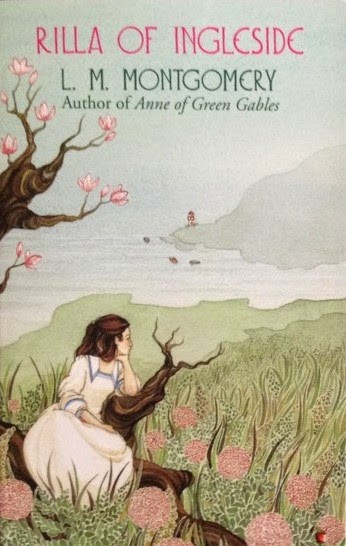 I've only read the first book in the Green Gables series, Anne of Green Gables, & that was many years ago. I loved Lucy Maud Montgomery's Journals, which I borrowed on Inter Library Loan as they were published over many years. Montgomery's life was a far cry from the happy family life of Anne Shirley, the Cuthberts & Gilbert Blythe, who she eventually marries. I think her writing must have helped her to survive her difficult circumstances with a husband afflicted with mental illness & her sons so very unsatisfactory. Virago are reprinting some of Montgomery's books & I was pleased to be offered Rilla of Ingleside & Jane of Lantern Hill for review. I was especially interested in Rilla of Ingleside because it deals with WWI & it was a very enjoyable as well as heartrending read.

Rilla is the youngest daughter of Anne & Gilbert Blythe. She's 15 & living a peaceful life in Glen St Mary, a small town on Prince Edward Island. Rilla is a typical teenage girl, wanting to grow up as fast as possible & willing to push against her mother's authority just a bit. Rilla is about to attend her first grown-up dance, at a lighthouse on Four Winds Point. Rilla hopes that Kenneth Ford will be there. He is & they dance together & spend an enchanted hour together on the beach. On the night of the party, war is declared between England & Germany, which means that Canada, as part of the Empire, is also at war.

Rilla's brothers Jem & Walter, join up. Jem, with much enthusiasm, as soon as war is declared; Walter reluctantly, as he dreads fighting & is afraid that his courage will fail him at a crucial moment. Other young men in the district enlist &, gradually, Glen St Mary becomes a place for women, children & older men. The strain of being left behind, waiting for news, relying on the newspapers for information of the progress of the war, becomes greater as news of the death & wounding of the local boys drifts back from Europe.

Rilla is determined to help the war effort. She starts a chapter of the Junior Red Cross. She adopts a baby when she calls at a house for a donation & finds a young mother dead & a slovenly, drunk old woman left in charge of a baby boy. His father has gone to England to enlist & Rilla is determined not to leave the baby with the old woman or put him in an orphanage so she takes him home with her in a soup tureen, the only possible receptacle. Rilla begins to grow up as she takes responsibility for the little boy who she calls Jims. The same stubborn nature that led her to announce that she would wear the expensive green velvet hat that she bought, despite her mother's advice, until peace came, also helps her to persevere in raising Jims with the help of a baby care manual & advice from Susan Baker, the family's cook & housekeeper.

There are many amusing episodes in the story. Rilla has to eat humble pie & apologise to Irene Howard, a disagreeable, spiteful girl, when she desperately needs her to sing at a Red Cross concert. Unfortunately, Rilla was so worked up about her apology that she didn't realise until she arrived at Irene's house that she had odd shoes on. Irene spends the whole interview staring at Rilla's feet & makes her grovel & almost lose her temper & walk out, before she agrees to help. Rilla organises a secret war wedding for Miranda Pryor when her pacifist father refuses permission for her to marry Joe Milgrave before he sails to Europe. Rilla, as bridesmaid, ends up having to hold Jims all through the ceremony when he has a tantrum & won't stop crying & then Miranda's overfed dog has a fit & Rilla has to try very hard to keep a straight face. It's something her mother, Anne, would have done in the old Green Gables days.

There's also a lot of poignancy in the story as is natural in a story set during the war. Not all the boys who enlist will come home & of those that do return, they will all be touched either physically or mentally by their experiences. Jem's dog, called Dog Monday, refuses to leave the railway station until he returns & becomes a sad, mournful presence as he refuses all comforts. I admit that I was tearful more than once. Rilla regrets that her youth is passing in such worry & anxiety, not just about her brothers ( another brother, Shirley, becomes a pilot) but also about Kenneth, who left her with a kiss but no firm commitment. Only when the war is over will Rilla & her family be able to look to the future with confidence.

I enjoyed Rilla of Ingleside very much. The style is quite sentimental & I grew very tired of Susan calling Gilbert Dr dear & Anne Mrs Dr dear. It's written in a very romantic style with noble speeches about patriotism & helping the mother country in fighting the Hun. However, it was published in 1921 & I suppose we've grown a little more cynical about such words as patriotism in the century since then. Montgomery writes beautifully of the landscape & the countryside of Prince Edward Island. I also enjoyed Gertrude Oliver, a schoolteacher who boards with the Blythes. She's older & has had a hard life & is reluctant to believe in her present good fortune. She is engaged to a soldier & is prone to prophetic dreams & grand statements. Rilla, Anne & Gilbert, however, are at the heart of the story & their emotions always rang true.

There's a copy of Rilla of Ingleside, as well as many other books by L M Montgomery, available at Anglophile Books.
Posted by lyn at 3:25 AM