Vittoria Cottage (cover picture from here) is the story of the Dering family, who live in the village of Ashbridge, just after WWII. Caroline is a widow in her late 30s or early 40s. She married young & her husband, Arnold, was much older &, by all accounts, a blight on humanity. Arnold was miserable, unhappy, never satisfied & crotchety. He stifled Caroline & wasn't liked in the local community. Caroline's children are James, serving with the Army in Malaya; Leda, pretty but difficult, dissatisfied with her lot like her father; & Bobbie, much more open & natural than her sister.

Caroline's sister, actress Harriet Fane, makes regular visits & whisks Caroline off to London for a change occasionally.  Harriet is younger than Caroline, very sophisticated but has no illusions about the difficulties of her sister's married life & is bluntly honest with her nieces, especially selfish Leda. As always in a Stevenson novel, there's a loyal retainer. In this case, it's Comfort Podbury, a still young woman who was jilted by her fiance when she grew enormously fat. Comfort is a member of a whole clan of Podburys who are evident in every part of village life.

Leda has become engaged to Derek Ware, a young man just as selfish as herself. Derek is supposed to be studying law but is restless after returning from his war service & is looking instead for a job with good pay & long holidays. Derek's father, Sir Michael, is a lonely widower who doesn't really approve of the engagement & wants his son to settle down to something. His daughter,
Rhoda, on the other hand, is studying at the School of Art in London &, in her father's opinion, working much too hard.

Robert Shepperton arrives in Ashbridge looking for peace & rest after his experiences in the war. He returned home from abroad to find his house had been bombed & his wife killed. His son, Philip, has been evacuated to the US &, after a long illness, he needs to recuperate. Robert becomes friends with Caroline & her company begins the healing process. Caroline has been content with her quiet life, although she worries about James & isn't convinced that Leda's engagement will make her happy. I loved Caroline, she was such a warm, sympathetic character.

It was important to Caroline to do things right, to do whatever she did to the best of her ability. She saw beauty in ordinary little things and took pleasure in it (and this was just as well because she had had very little pleasure in her life). She took pleasure in a well-made cake, a smoothly ironed napkin, a pretty blouse, laundered and pressed; she liked to see the garden well-dug, the rich soil brown and gravid; she loved her flowers. When you are young you are too busy with yourself - so Caroline thought - you haven't time for ordinary little things but, when you leave youth behind, your eyes open and you see magic and mystery all around you...

Caroline's feelings for Robert soon deepen from friendship to love but she is uncertain about his feelings for her as she thinks he's falling in love with Harriet. James returns from Malaya & changes the atmosphere of the cottage as he leaves his belongings all over the hall & begins thinking about his future which he hopes will include Rhoda Ware. Rhoda, however, is reluctant to give up her independence & her art which is so important to her. 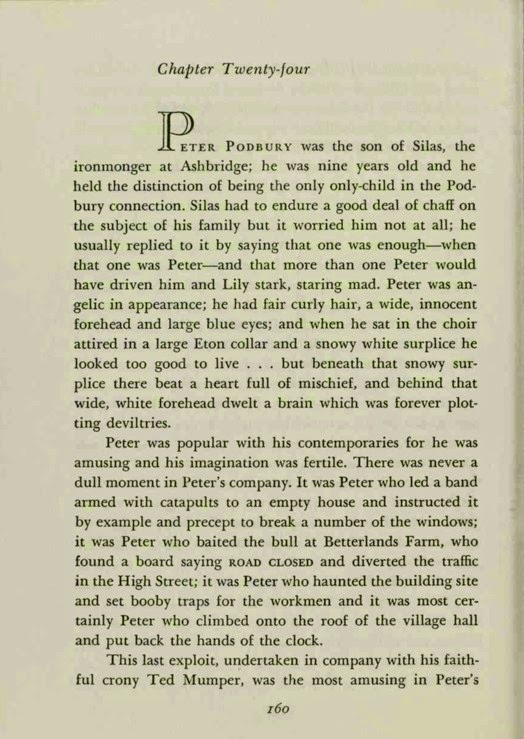 I read Vittoria Cottage thanks to Open Library & I read it as a PDF file in Bluefire Reader on my iPad instead of as an ePub file in the Overdrive app. What a difference! Reading the PDF file is just like reading the actual book as you can see. No scanning glitches & it's a much better reading experience. Thanks to Bree at Another Look Book (do have a look at Bree's blog, lots of great reviews of middlebrow novels) & the support people at Open Library for helping me sort it out.

I'd also like to recommend this website to any D E Stevenson fans, especially those of us who have just discovered her & are reading everything we can get our hands on. There's a fantastic table listing all the series & the recurring characters. Although, I must say that I haven't had any problem reading the books out of order. I read the Miss Buncle series out of order & I recently listened to Summerhills on audio but haven't read Amberwell. Stevenson filled in the background of the characters so well that I never felt lost.
Posted by lyn at 1:54 AM