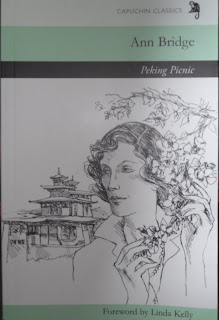 Peking Picnic is a story of another time & place. Published in 1932, it is set in 1920s China. The main characters are diplomats, mostly from the British legation in Peking. The legation represents a little piece of Britain among the vastness of China, a little piece of familiarity among the exotic strangeness of a country so far from home. This is still the China of the Boxer Rebellion rather than the Republican China of the mid 20th century. The diplomats & their families live a very comfortable life. Big houses, lots of servants, a restricted but adequate social round of dinners, picnics & tennis parties.

Laura Leroy is the wife of the Commercial & Oriental Attache to the British Legation. Henry is a rather remote figure, absorbed in his scholarly writing & his polo ponies. Laura is torn in two, desperately missing her children at school in England, & homesick for Oxford, but also fascinated by China. She has learned to speak the language, is interested in the politics & the culture & appreciates the beauty of the country. She has her nieces, Lilah, a calm, statuesque beauty, & Judith, enthusiastic & eager for new experiences, staying with her for a visit. Judith has become involved with Derek Fitzmaurice, who works at the Legation & is known for his many love affairs.

The Military Attache, General Nevil & his wife, Nina, plan an expedition, a long weekend travelling to a famous shrine, Chieh Tái Ssu, to see the blossom & picnic among the hills. The Neviles have a guest from Cambridge, Professor Vinstead, & they want to show him something of the countryside. Laura Leroy & her nieces are invited, the Nevile’s niece, Annette, American novelist Miss Hande, Derek Fitzmaurice, Major La Touche & Henri Delache, an attaché from the French Legation.

The first half of the novel slowly introduces all these characters & assembles the party for the picnic. There are rumours of feuding warlords & armies on the move that threaten to postpone the trip but, eventually, they set off for Chieh Tái Ssu. They travel up into the hills, mostly on foot & then by donkey up to the first shrine where they stay overnight. This reminded me of the way travellers in medieval Europe would travel from one monastery to the next on a journey, taking advantage of the basic but adequate accommodation. Of course, the Neviles are not content with the basic provisions provided by the monks.

When Professor Vinstead was first told by the Neviles that he was to go to the Hills on a weekend picnic, his mind immediately conjured up those rather unpleasing visions of sandwiches, sardines and ruined coffee in thermos flasks with which the word is usually associated in English minds, prolonged over three painful days and nights. It was, therefore, with some surprise that he found himself sitting down at a table correctly spread with linen, glass, and a profusion of silver, being offered sherry by one white-robed manservant, and clear soup with a pigeon’s egg in it by another. How such things were produced in the heart of the hills, twenty miles from anywhere, was a mystery which his mind, dulled by fatigue and hours spent in the open air, refused to grapple for the moment. It was sufficiently astonishing to be dining in such a place.

The next day they move on to Chieh Tái Ssu. The tension really builds from this point. Glimpses of dishevelled groups of tai pings, deserting soldiers, roaming the hills are followed a full-scale attack of bandits at a temple where half the group have gone to admire the views. A monk is killed & the British party are held captive by an increasingly unruly group of soldiers. Laura Leroy, with her knowledge of Chinese & understanding of the Chinese character, is thrust into the position of leader. She manages to impose some level of authority on the soldiers, demanding to see their leader & threatening all sorts of dire punishment if they dare to hurt British & American citizens. Their eventual rescue comes from an unexpected source after some pretty tense moments of threatened violence.

For all this excitement & tension though, Peking Picnic is really a study of character & relationships. Several romances blossom on the trip, most interestingly between Laura & Professor Vinstead. They feel an immediate bond & Vinstead becomes more intrigued & attracted to Laura as the trip progresses. Laura is a very cool, detached character. Although we see most of the story from her point of view, she’s not easy to know. Her homesickness & desire to see her children is often evoked, triggered by letters or memories. She’s a very practical woman, always prepared for any emergency, & consulted almost as an oracle by the young lovers in the party. Her detachment isn’t always likeable but her good manners mean that she seldom displays any impatience with the demands others put upon her. Peking Picnic was Ann Bridge’s first novel. She was a diplomat’s wife who used the experiences & settings of her husband’s postings in her novels. I do wonder if she was anything like Laura Leroy.

Those four days had been a period of accelerated growth, of swift subtle modification for several of the weekenders who had set out so lightheartedly on their picnic. Derek, Judith, Annette, Laura, Vinstead – even Miss Hande perhaps, as to her theories about the Chinese – had been confronted, not fruitlessly, up at Chieh Tái Ssu, with the ancient wisdom and the blossoming tree.

A copy of this book is available from Anglophile Books.
Posted by lyn at 2:14 PM