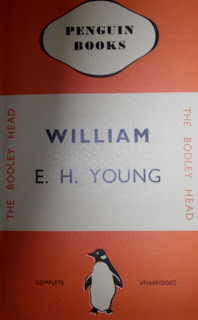 I’ve always believed that there’s a right time to read a book. I read Pride & Prejudice when I was 13 & I just didn’t get it. It made no sense to me at all. I didn’t begin to appreciate Jane Austen until I read Mansfield Park at university in my 20s. Everything just clicked & since then I’ve been a passionate Janeite & read all her novels several times & biographies & criticism etc etc. Although not such a revelatory moment as my discovery of Jane, this week I’ve read E H Young’s novel, William, after being inspired by Harriet Devine’s review. I’d started reading William several times over the past 25 years – yes, that’s how long he’s been languishing unread on my shelves. Reading Harriet’s review inspired me to get past the first few pages & get involved with the characters. This is why I never apologise for my overflowing tbr shelves. One day I will read all of those books. Every book (like dogs) will have its day. William had been unread longer than most because it was part of a set of facsimile Penguins I bought in 1985 to celebrate Penguin’s 50th anniversary. 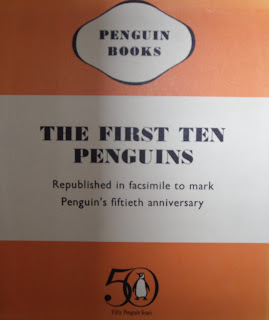 The boxset was quite a bargain as I waited until the celebrations were over & it had been reduced by over 50% of the original price before I bought it. So, the box was shelved under P & almost forgotten. I love these old Penguins. Such soft, floppy covers & the original, fatter Penguin on the cover. But, there’s no blurb on the books. So, unless I knew the author – like Agatha Christie or Dorothy L Sayers – I didn’t have much incentive to pick up the other books in the box. I’d already read the Sayers & Christie as well as Andre Maurois’s Ariel, a biography of Shelley. Hemingway I’ve tried & failed with time & again. I think A Farewell to Arms will remain unread – for now, at least. 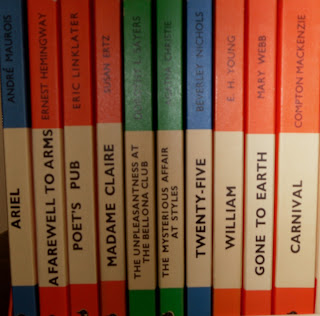 Since 1985, I’ve read some of the other books, mostly in the last few years as I’ve discovered the middlebrow novel. I’ve read Madame Claire & Beverley Nichols’s autobiography, Twenty-Five. And now, William. 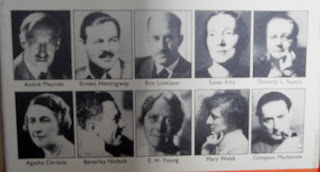 E H Young was an interesting woman (you can see her in the middle of the bottom row in this picture of all the authors in the Penguin boxset). Born in 1880, she married a solicitor who was killed at Ypres during WWI. She moved to London & lived in a ménage a trois with her lover, Ralph Henderson & his wife. Henderson was a headmaster at a well-known school in Dulwich & I have to wonder how they managed to keep the relationship a secret in such a hothouse atmosphere. The mind boggles! After Henderson’s retirement, they lived together in Bradford-on Avon until Young’s death in 1949.

William is the story of a conventional family & the emotional fallout when one of the daughters causes a scandal. William Nesbitt is a successful ship owner in Radstowe. He’s worked his way up from being a sailor to owning & building the ships. He’s an affectionate husband to Kate & a fond father to all his children although he recognizes that he loves some more than others. His only son, Walter, works with him in the business & is married to Violet. His daughters’ marriages have been less successful. Dora is married to Herbert, an unattractive, overbearing man but she stays for the sake of her children. Dora is a kind, caring woman, stifled in a miserable marriage.

Mabel is married to self-righteous, pompous John. She has three sons who she has named Cromwell, Gladstone & Hampden, after John’s heroes. When I first read this, I thought they had been named Oliver, William & John but no, their Christian names are Cromwell, Gladstone & Hampden.  Poor boys! Mabel is one of those irritating women who is forever saying she can’t afford this or that & acts the martyr in front of her well-off family trying to make them feel guilty. She runs from place to place to avoid paying for taxis, wears unattractive shoes because she’s too proud of her thrift to buy nice ones & mollycoddles her sensitive sons but also boasts of their intelligence & strength. Mabel is the one character in the book that no one else ever shows any real affection for. Even her mother is exasperated by her deliberate dowdiness & self-pity.

Janet, the youngest daughter, is still at home. Quiet, moody, & fancying herself in love with her brother-in-law, Oliver, Janet is the daughter that William wants to encourage to blossom. Lydia, married to Oliver, is the rebel daughter. William’s favourite, Lydia has married Oliver & moved to London, where they live a Bohemian life. Too many parties, late nights & unsuitable friends, according to Kate. Lydia leaves Oliver to live in the country with Henry Wyatt, a novelist, & causes a scandal that causes rifts within the Nesbitt family.

Kate’s response is anger & shame at the scandal. William wants Lydia to be happy & reluctantly faces the fact that he & Kate will never agree about Lydia. Dora is Lydia’s champion & defies her husband to visit her. Mabel is suitably shocked & appalled & Janet is miserable at the thought of Oliver’s unhappiness. This is a novel of relationships & E H Young is very good at illuminating these, especially the relationship of father & daughter. William is an immensely sympathetic character. His partiality for Lydia doesn’t blind him to the fact that she’s a very difficult person to live with. She found Oliver too compliant, too unchallenging but once she’s left him for Henry, she’s not entirely satisfied with her new lover either. William also tries to encourage Janet to fly the nest & meet new people away from her rather narrow life at home with her parents. I enjoyed William very much & I’m so grateful to Harriet for reminding me of E H Young & inspiring me to pick up one of her novels.

Now what next from the Penguin boxset? I'm listening to Compton Mackenzie's Monarch of the Glen on audio at the moment (read beautifully by David Rintoul) so maybe his Carnival? Or Mary Webb. Margaret at BooksPlease has been rereading Gone to Earth & I've always been curious about Webb because she's one of the authors mocked by Stella Gibbons in Cold Comfort Farm, one of my favourite books. I blogged about it here. I really should be reading a few of the huge stack of library books I have at the moment. More about them later...
Posted by lyn at 4:35 PM