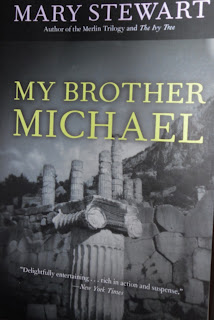 Camilla Haven is sitting in a cafe in Athens writing to a friend. “Nothing ever happens to me” she complains. Famous last words for any heroine in a novel by one of the best writers of romantic suspense, Mary Stewart. Camilla is mistaken for a girl who has hired a car to take to Monsieur Simon in Delphi on “a matter of life & death”. She tries to discover who hired the car or where it was hired but when she’s unsuccessful, she decides to drive the car to Delphi herself. She wanted to visit the temple anyway & her money for bus fare is running low.  She also feels concerned about this Monsieur Simon & the peril he might be in. So, she sets off on a hair-raising drive on perilous roads to deliver the car to a stranger.

When she becomes stuck on a narrow village road, unable to reverse the car or go forward & surrounded by superior Greek men laughing at her predicament, who should come to her rescue but the very Monsieur Simon to whom she is delivering the car. To Camilla’s surprise, he’s English, a teacher on a pilgrimage to Greece to visit the place where his brother Michael died during the war. Simon knows nothing about the car or the girl who hired it but he takes over the driving & they set off for Delphi. Michael Lester worked for the British intelligence service during the war & was posted to Greece to help local resistance groups during the German occupation. He was living with a local family in a small village, Arachova, when he was discovered by soldiers. The son of the family was shot & Michael escaped to the hills to prevent anyone else suffering the same fate, even though he had been wounded. His family heard that he was missing & it wasn’t until some time later that they heard that he had been killed during his attempt to evade the Germans & was buried at Delphi.

Simon was much younger than Michael & he & his father were devastated by the news of his death. Now, fourteen years later, Simon’s father has died, &, among his papers, Simon has found Michael’s last letter among his papers, along with three gold sovereigns. The letter is full of excitement & Simon thinks Michael had discovered something important on Mt Parnassus, where he died. The letter is cautious, because of the tortuous path it will have to take to be delivered, but the ending makes it clear that Michael has found something,


...I’m seeing a man I can trust tomorrow, and I’ll tell him, come what may. And all being well, this’ll be over some day soon, and we’ll come back here together to the bright citadel, and I can show you then – and little brother Simon too. How is he? Give him my love. Till the day – and what a day it’ll be!

Simon & Camilla visit  Stephanos & his family in Arachova to find out where Michael died. Simon is shocked to discover that Michael wasn’t killed by the Germans but by a man who lived in the village, Angelos. He was a villain, working against his own people in the complicated political situation of resistance fighters & collaborators. Angelos disappeared not long after Michael’s death & is thought to have died in Yugoslavia. His cousin, Dimitrios, has returned to the village & claims to have seen Angelos – or his spirit – roaming the hills.  Simon is determined to find out why Michael was killed & what it was that he was so excited about just before his death.

My Brother Michael is a terrific adventure story with lots of atmosphere & romance. Mary Stewart’s heroines are rarely passive & Camilla is a resourceful woman who feels an immediate connection with Simon & is drawn into his quest to find the truth about his brother’s death. Simon is a wonderful hero. Handsome, amusing, he treats Camilla as an equal, something her fiancé, Philip, never did. Camilla is searching for something too, a sense of herself, after a long engagement to a man who treated her like a doll. There’s a wonderful scene when they explore the ruins of the Temple at Delphi by moonlight & Simon quotes Ancient Greek verse from the stage of the amphitheatre.

Mary Stewart loved to set her books in exotic locations & you can feel the heat & dust of Greece on every page of this book. The references to the ancient world add to the atmosphere of danger & revenge but there are some very real, ugly villains in the book. The suspense as Simon & Camilla explore the mountain & find a cave & its hidden glory is very real. The dangers they face are real, too. I liked the fact that the romance is there from their first meeting but it never overwhelms the exciting, suspenseful story.

I read all of Mary Stewart’s books when I was a teenager, along with other favourite authors of the genre like Victoria Holt & Catherine Gaskin.  Chicago Review Press have recently reprinted some of Mary Stewart’s novels in the US & Hodder & Stoughton have many of her titles in print in the UK. I intend to revisit more of her books. There’s a sense of nostalgia because they were written mostly in the 50s & 60s & also because they remind me of my teenage years. But that wouldn’t be enough to make me want to reread them if they weren’t also suspenseful, romantic stories of adventure that keep me up until the small hours to read just one more chapter. Mary Stewart fans might want to have a look at this website & blog maintained by some avid fans of her work.
Posted by lyn at 2:16 PM