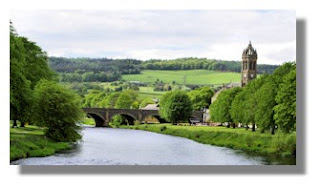 I discovered O Douglas through Greyladies, the Edinburgh publishing firm that specializes in early 20th century fiction. So far, they've published Pink Sugar, Eliza for Common & The Proper Place & I hope they continue to reprint her books. While hunting around for more O Douglas, I discovered that several more of her novels were available from Project Gutenberg to download free for my e-reader. Among them was Penny Plain. Then, a couple of weeks ago, I was reading Penny's blog, Scottish Vegan Homemaker (lovely blog by the way. Books, cats & delicious vegan recipes) & she showed off her collection of O Douglas novels & mentioned that she was reading Penny Plain for the umpteenth time. That was all the encouragement I needed to decide to read Penny Plain next.

O Douglas was the pseudonym of Anna Buchan, sister of the more famous John, author of The 39 Steps & many other adventure novels. I would describe her books as charmingly comfortable & I mean that as the highest praise. Her characters are charming, her stories are full of human interest, there's always a lovely romance & there's a lot of humour too, mostly through one of her small boys. Poignantly I learned from Penny's blog that the small boys in her books (in Penny Plain it's Gervase Taunton, known as the Mhor) were all based on her own young brother who was killed in WWI.

Penny Plain is the story of the Jardines. Jean is 23 & has had the care of her two younger brothers & an adopted brother, the Mhor, since the death of dourly religious Great Aunt Alison who brought them up in Priorsford, a small town on the Tweed based on Peebles. David is about to go to Oxford & Jean has been scrimping & saving to make this happen. The family live frugally at The Rigs, a quaint, inconvenient house in the older part of town. Pamela Reston, a 40ish society beauty, arrives to stay in Priorsford while she considers her future. She's had a proposal of marriage from a wealthy politician but isn't sure what she wants to do. She soon makes the acquaintance of the Jardines & finds herself caught up in the life of the town. Pamela's brother Biddy, Lord Bidsborough, is an adventurer & explorer & she describes Priorsford life in her letters to him. When he finally arrives for a visit, he's attracted to Jean although she can't see past his wealth & her poverty & responsibility for her brothers. Lewis Elliott, a cousin of the Jardines, is also an old friend & sweetheart of Pamela's & they tentatively renew their friendship.

The other inhabitants of Priorsford are an interesting lot, their exact social relationships to each other very finely described. There's the overbearing Mrs Duff-Whalley & her unpopular daughter. She's the sort of woman who is always organising something & most people agree with her suggestions & directions because they just want to get rid of her. Mrs Hope is a spiky woman with a kind heart who has lost all three of her sons & lives with her daughter, making the best of her time until she can be reunited with her sons after death. The kindly minister, Mr MacDonald & his wife are good, true Christians, doing good on a tiny stipend. The genteel Miss Watsons who are delighted to be asked to Pamela Reston's tea party but secretly wish they could forego the social trauma & just sit at home in their comfortable clothes. When Jean receives an unexpected inheritance, she finds that the money is more of a burden than a blessing & her position in Priorsford society undergoes a change that disconcerts her.

The charm of Penny Plain is the depiction of small town Scottish life after WWI. I loved all the domestic detail of the Jardines' house. Glaswegian Mrs M'Cosh who looks after the family faithfully but yearns for the kitchen in one of the smart new villas on the other side of town. Pamela's landlady, Bella Bathgate, with her dreadful cooking & genteel ideas about furnishings. Jock & the Mhor (which is Gaelic for the Great One), with their dog, Peter, always in the middle of an adventure or planning mischief. Jean is good but not priggishly so. She lives for the boys & takes her responsibilities seriously. Her inner life is nourished with books & poetry & in the kindnesses she can do for others. She reminded me of Kirsty in Pink Sugar, another good young woman, but I liked Jean more because she doesn't have a perfectly comfortable life. She has to struggle & there's a feeling that her youth will pass her by while she lives & works for her brothers. Pamela Reston is the catalyst that starts to bring Jean out of her comfortable but limited sphere & the inheritance, while a worry, is also a way to broaden Jean's horizons & give her a chance to live for herself.

As I said, O Douglas's novels are charmingly comfortable but they also have an undercurrent of sadness. The books I've read so far were all written in the 1920s & are very perceptive on the social reality for many women who had lost men in the War.
I read Penny Plain on my e-reader, having downloaded it for free from Project Gutenberg. My only problem with reviewing books from my e-reader is finding pictures of the covers to illustrate my posts. The only cover I could find for Penny Plain had a sailboat on the cover & I couldn't see what on earth that had to do with the book. If there was a sailing chapter, I missed it! So, I've chosen a photo of Peebles, the original of Priorsford, which I found here.
Posted by lyn at 1:17 AM