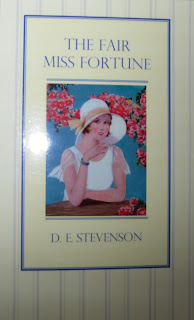 I've been reading The Worst Journey In The World by Apsley Cherry-Garrard, a gruelling account of Scott's last Antarctic expedition. It's a wonderful book but very distressing so I've needed something completely different to read last thing at night to stop myself worrying about Cherry, the other expedition members & especially the ponies & dogs. The Fair Miss Fortune couldn't be more different & fitted the bill perfectly.

D E Stevenson wrote The Fair Miss Fortune in the late 30s. Her publishers weren't interested in publishing it & so, it was left in the attic until it was recently rediscovered & published for the first time by Greyladies, an Edinburgh publishing house who introduced me to the delights of O Douglas & Mabel Esther Allan's mystery novels. This edition includes several letters between Stevenson & her agent about the difficulties they were having placing the novel. The theme of twins (this isn't giving anything away as it's in the letters) was thought to be a little hackneyed & they thought the story too old fashioned for the modern reader.

Jane Fortune moves to the village of Dingleford to open a teashop. She's accompanied by her old Nannie & she plans to renovate the house she's bought & capture passing trade from the recently built bypass. The previous owner of the house, Mrs Prestcott, is a vile woman who totally dominates her nice but downtrodden son, Harold. Empire builder Charles Weatherby is home on leave from India, living with his invalid mother & trying to avoid boring social engagements. Once he meets Jane, he falls almost immediately in love, saving her from an overflowing cistern & chopping down monstrous rhododendron bushes. Harold has also met Jane & is a little smitten although his shyness & sense of inferiority hinders him from doing anything about it.

The fun really starts when Jane's identical twin sister, Joan, arrives. Joan has been working in London while Jane establishes the teashop & finds out whether it will be successful enough for them to make a living in Dingleford together. Joan appears one day in the local shop, ignoring Charles & denting his ego. She's left London in a hurry as her boss is making a nuisance of himself. She swears Jane to secrecy as she's afraid he'll follow her & discover her whereabouts. Harold arrives one day to see Jane, meets Joan instead and, after fixing the doorbell, finds himself falling in love. Joan's romance with Harold blossoms, even though he thinks it's Jane he's in love with. The misunderstandings culminate with both Harold & Charles believing they're engaged to Jane & the sisters have to confess all.

The plot of The Fair Miss Fortune certainly isn't new but D E Stevenson has a sure touch & her cast of characters are a delight. Mrs Trail, who runs the village shop; Charles's mother, Emma; the Morleys, a discontented family with two very modern children longing for the bright lights & nightclubs of London; & especially monstrous Mrs Prestcott, with her newly built home, Suntrap, all sleek lines & a roof for sunbathing & her tyranny over Harold. She even tries to sabotage his efforts to lose weight by ordering all his favourite desserts. The scene where Mrs Prestcott confronts Jane to warn her off is obviously inspired by the similar scene between Elizabeth & Lady Catherine in Pride & Prejudice. The twins take a childish delight in confusing everybody right up to the end of this charming novel which could have been designed for the label comfort reading. The fact that the book was rejected shows once again that even established authors (Stevenson had been writing since the early 1920s) can have trouble being published. I'm glad the resurgence of interest in D E Stevenson has led to more of her work becoming available.
Posted by lyn at 11:45 AM