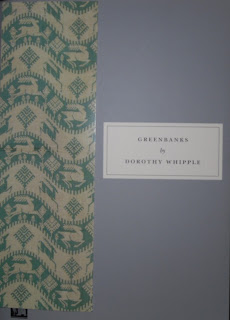 Greenbanks is the story of the Ashton family. Any novel by Dorothy Whipple is guaranteed to be an absorbing story of family relationships, romance & heartache & Greenbanks is no exception. They're the qualities that have made her Persephone's best-selling author. But, can I say that this is not the most absorbing Whipple I've read? I find that the Whipples I've read fall into two camps. The unputdownable ones like Someone At A Distance, They Were Sisters, They Knew Mr Knight & High Wages & the pleasant but more ho-humish ones like The Priory & Greenbanks.

I enjoyed the relationship between Louisa Ashton & her granddaughter Rachel very much. This is a theme that's mentioned in every review I've read so far. Rachel is about three when the novel begins & 18 at the end. Her relationship with Louisa is the most nurturing one she has. Her mother, Letty, is a disappointed woman. Married to pompous Ambrose & with three sons as well as Rachel to look after, she often seems exhausted. Rachel's schools are chosen not for their academic excellence but for their proximity to Greenbanks so that she can have lunch with her grandmother & stay there as well. Louisa encourages Rachel in her ambitions, but subtly. When Ambrose refuses to allow Rachel to take up her scholarship to Oxford, Louisa is there to support Rachel.

Louisa's marriage wasn't particularly happy either. Her husband, Robert, was a philanderer & is killed in a carriage accident while driving out with his latest mistress. Her eldest son, Jim, runs the family business but he's an unsympathetic man, thinking about the fortune he hopes to make & the awful young woman, Mabel, that he wants to marry. He has no real sympathy with his mother & is contemptuous of his brother, Charles, his mother's favourite. Charles is charming but feckless & eventually Jim & Ambrose pack him off to South Africa to make a living or disappear altogether - they don't really mind which. The scene where Louisa travels to London to see Charles off is heartbreaking.

The agony was long. The train did not move. Louisa's lips ached intolerably. She was determined not to cry, not to upset him. When the train went out, she could give way, but not before. She began to long for the train to go, to get it over, to let her heart break this iron oppression, and yet when the train began to move, she hurried along with it, and Charles had forcibly to tear his hand from hers.

When Charles returns with no money, a monkey & a parrot, his brother is appalled & soon packs him off to Malaya. Only Louisa is really pleased to see him & her only rebellions against the might of the men of the family are on Charles's behalf. Charles returns from Malaya in 1914 to enlist in the Army & cause his mother more anxiety.

Louisa's daughter, Laura, is another unhappy woman. Engaged to Cecil Bradfield, the love of her life, they quarrel over her green velvet hat, the ridiculous argument turns serious & neither will back down. Laura marries a rich manufacturer from Nottingham out of despair & leads a miserable life of luxury. Her rebellion, when it comes, causes Louisa anguish but when Laura, as always, relies on her mother to help her, Louisa is again the rock on which all her children rely. The loving, supportive relationship of Louisa & Rachel contrasts always with the ungrateful, selfish generation in between.

The most interesting character in the book for me was Kate Barlow. Kate had an affair with a married man, had his child, and, after the baby was taken for adoption, left town to work at poorly paid jobs as companion. After Charles leaves for South Africa, Louisa, who has kept in touch with Kate, decides to ask her to come & live with her. The family are scandalised, of course, & Kate, when she arrives, is quite different to how Louisa expected. Louisa made the offer from friendship & thought that Kate would look on her position as that of a guest. Kate, however, can't leave her past behind. The scandal of her love affair has scarred her character & she can't let anyone forget it. The portrait of this woman is summed up in one phrase, "She was always inadequate at rejoicing." Her presence is a blight on family dinners, her attempt to join a wartime sewing circle is a disaster, she gives no pleasure to anyone & isn't able to receive the gifts of friendship & love that Louisa would happily give her. She is ungracious, prickly & difficult. Even when her life seems about to change for the better, circumstances are against her.

I did enjoy reading Greenbanks. It's absorbing & full of those domestic details of middle-class life of the period that I enjoy. There are characters to love & characters to sneer at. Even then, Dorothy Whipple is too clever to have merely stock characters. Even Ambrose can be pitied at the end of the book as he imagines that his wife & daughter have rejected him. I think it's just that I have such high expectations when it comes to reading Dorothy Whipple that anything less than complete absorption & staying up far too late to finish the book, means that I feel slightly disappointed. There are other reviews of Greenbanks at normblog, Book Snob, & A Year of Actually Reading My Own Books.
Posted by lyn at 2:37 AM