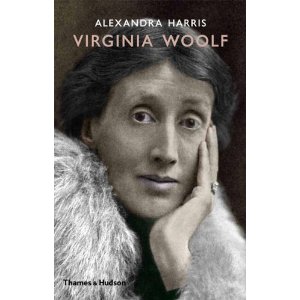 This is an elegantly written, concise survey of Woolf's life & work. It would be ideal for someone who knew little about Woolf & wanted to know who she was. Harris acknowledges the magnificent biography of Woolf by Hermione Lee, which Harris called, "the book that showed me what literature can do and sent me off to study English." Woolf's life is economically described. Her happy early childhood, the summers at Cornwall that inspired To The Lighthouse, her despair & breakdown after the death of her beloved mother, Julia. Her education, directed by her father, Leslie Stephen, & the revelation of books & literature. The escape from conventionality that was only possible for Virginia & her siblings after their father's death. Life in Bloomsbury, Richmond & Sussex, marriage to Leonard Woolf. Her relationships with friends & lovers. The mental illnesses that punctuated her life & the soothing work at the Hogarth Press that helped her to recover.The last years with the threat of war & her final decision to commit suicide when she felt the mental illness returning in 1941.

I found it especially invaluable for the insights into the fiction, which I've never really been able to love, & the connections between the life & the work. I always feel at a bit of a distance from Woolf's fiction. I've read most of the novels but my real love is the Diaries. From A Writer's Diary, the selection that Leonard put together to show Virginia as a working writer (about to be reprinted by Persephone) to the complete six volumes, I loved Woolf's voice.

Woolf did not conceive her diary as a place of guarded privacy...She started to write for her older self, imagining conversations with Virginia Woolf at fifty. And she was fully aware, especially as she became more famous, that her diary might well be read by others. Reading her accounts of meetings with Yeats or T S Eliot, for example, one feels her shaping the moment for posterity. There is surprisingly little about the boredoms, humiliations, and terrors of illness. As usual, she bothered to think through the reasons for this: "I want to appear a success even to myself." The diary feels so full and expansive that it is tempting to imagine that all her life is here. It is not, but here is the version of life she wanted to remember.

I find it fascinating to pick an event from the diaries & then read the letters she wrote at the same time. As we all do, she had different voices for different people & she can write several letters about the same incident to different people, putting a slightly different slant on it each time. It's even more exciting to open A Writer's Diary as I just did & find myself reading the entry she made on October 27th 1928 when she returned from giving the lecture that became A Room of One's Own.

Thank God, my long toil at the women's lecture is this moment ended. I am back from speaking at Girton, in floods of rain. Starved but valiant young women - that's my impression. Intelligent, eager, poor; and destined to become schoolmistresses in shoals. I blandly told them to drink wine and have a room of their own. ... I fancy sometimes the world changes. I think I see reason spreading. But I should have liked a closer and thicker knowledge of life. I get a sense of tingling and vitality from an evening's talk like that; one's angularities and obscurities are smoothed and lit.

I also prefer the essays to the fiction. The Common Reader books are just so full of Woolf's wide reading & Harris describes how much research & reading went into just one essay. I recently treated myself to Vol 5 of the Collected Essays edited by Stuart N Clarke which contains the second series of The Common Reader as well as the essay Women & Fiction that became A Room of One's Own & I've been reading an few essays every week. 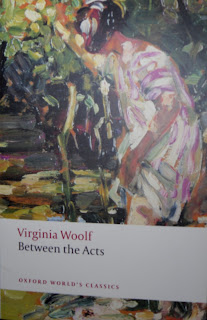 Inspired by this biography, I did read Between the Acts last week. I admired it but it left me cold. I think I'll just have to admit quiet defeat & keep reading the essays, letters & diaries.

Virginia Woolf is a beautifully produced book. A compact hardback with almost 50 illustrations it's an example of a book that doesn't need to be a single page longer. The final chapter is a survey of Woolf's reputation since her death, & is especially good on the various feminist interpretations that portrayed Woolf as a victim of the patriarchy & the medical establishment or a lesbian feminist heroine. Alexandra Harris's version of the life is admirably balanced & gives full weight to all the aspects of Woolf's life. I enjoyed it very much.
Posted by lyn at 2:45 AM