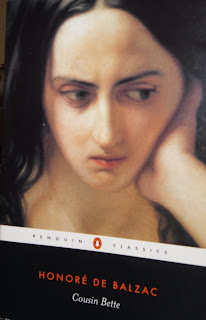 Cousin Bette is the story of a scorned woman and her terrible revenge. Lisbeth Fischer, cousin Bette, is a poor relation. She grew up in the country & was always jealous of her beautiful, virtuous cousin, Adeline. When Adeline marries Baron Hector Hulot & moves to Paris, Bette also goes to Paris, to work as an expert seamstress & embroiderer. She lives in a poorer part of town while Adeline & her family – the Baron, son Victorin & daughter, Hortense – live in a luxurious townhouse. Bette is treated as one of the family, invited for regular dinners & she hides her jealousy & resentment as she ingratiates herself into the family. Adeline may be beautiful but she is unhappy as her husband has been unfaithful to her for most of their marriage. Hector is not only unfaithful but foolishly extravagant, spending money on his mistresses that should have been saved for Hortense’s dowry.

As the book opens, Victorin’s father-in-law, the wealthy merchant Crevel, is planning a revenge of his own. Hulot has stolen Crevel’s mistress, the actress Josepha, from him. Crevel is another middle-aged libertine, posturing & posing & using his wealth to corrupt others. He plans to exploit Adeline’s need for money for her daughter’s dowry & convince her to become his mistress,

Until this moment the Baroness had held out bravely under the three-fold torture that the interview’s plain speaking inflicted upon her heart, for she was suffering as a woman, a mother, and a wife. As a matter of fact, so long as her son’s father-in-law had shown himself overbearing and aggressive, she had found strength in the very opposition of her resistance to the shopkeeper’s brutality; but the good nature he evinced in the midst of his exasperation as a rebuffed lover and a handsome Captain of the Guard turned down released the tension of nerves that had been strained to breaking point. She wrung her hands, dissolved into tears, and was in such a state of dazed exhaustion that she let Crevel, on his knees again, kiss her hands.

Adeline sends him packing but this is only the beginning of the Hulot family’s troubles. Bette has told Hortense that she has a lover, a young Polish sculptor living in her building, and that they will marry when his genius is recognized. The truth is rather different. Bette saved the young man, Wenceslas Steinbock, from suicide & has bullied him into doing some work by supporting him & promising to find him patrons. Bette enjoys the power she has over Wenceslas & by making him dependant on her, she can patronise him as she feels patronised by the Hulot family. Hortense becomes obsessed with meeting Bette’s young “lover” & she secretly engineers a meeting at the dealer’s shop where his work is sold. Hortense succeeds all too well as she & Wenceslas fall in love & plan to marry.

This is the point where Bette’s resentment becomes a vicious plan of revenge. She will not be happy until the Hulots are completely destroyed. Baron Hulot’s mistress, Josepha, dumps him for a handsome Duke & he decides that he’s tired of actresses & courtesans who spend his money & then leave him for a richer protector. Escorting Bette home one day, he sees Valerie Marneffe, a seemingly modest young woman married to one of the clerks in his office.  He’s immediately attracted & Valerie contrives, with Bette’s help, to ensnare Hulot. Bette may be plain, insignificant & badly-dressed but she knows how to become indispensable to Valerie & the two women become great friends,

In both her new plot and her new friendship, Lisbeth had indeed found an outlet for her energy much more rewarding than her insensate love for Wenceslas. The delights of gratified hatred are among the fiercest and most ardent that the heart can feel. Love is the gold, but hate is the iron of that mine of the emotions that lies within us.

Hortense & Wenceslas marry after Baron Hulot agrees to help him secure an important commission from the government, the statue of a famous man. After three years of happiness, Bette’s revenge enters a new phase. Not content with destroying Adeline’s happiness as the Baron, more infatuated with Valerie than ever, spends every penny on his mistress, Bette contrives a meeting between Valerie & Wenceslas. Wenceslas falls in love with Valerie & Bette makes quite sure that Hortense sees an incriminating letter that leaves her in despair. Valerie, meanwhile, has become a natural courtesan. Her ineffectual husband wants promotion & tries to blackmail the Baron to get what he wants. Valerie is not only kept by Hulot but also has Crevel dangling after her as well as Wenceslas & her first love, a Brazilian nobleman, who has returned to Paris with a fortune to share with her. When Valerie finds herself pregnant, she convinces all four of her lovers that the child is theirs.

Bette’s ambitious plans don’t just end with the ruin of the Hulots. She now decides that she would like to be the wife of elderly Marshal Hulot, the baron’s rich brother, an admired veteran of Napoleon’s army. She very cleverly presents herself to the Hulots as their friend & supporter, while also working with Valerie (who doesn’t realise how she has also been manipulated by Bette) to force the Hulots into financial ruin. When the family is finally ruined socially & financially, Bette is overjoyed,

And so Lisbeth triumphed! She was about to attain the goal of her ambition, she was about to see her plan accomplished, her hatred satisfied. She revelled in anticipation of ruling the family that had despised her for so long. She promised herself that she would patronize her patrons, be the gusrdian angel supporting the ruined family. She hailed herself as ‘Madame le Comtesse’ and ‘Madame la Marechale’, bowing to her reflection in the looking-glass. Adeline and Hortense should end their days in penury, miserably struggling to keep their heads above water, while their Cousin Bette, received at the Tuileries, was playing the fine lady.

But there are still a couple of turns of Fortune’s wheel before this wonderful story ends!

I loved this book. It’s so joyfully cynical about love, fortune, marriage, virtue & vice. I can’t imagine any 19th century English novelist writing like this. I think Wilkie Collins could have if he’d lived in France. The all-powerful circulating libraries like Mudie's would never have allowed such cheerfully amoral novels to corrupt the minds of their readers. Bette’s plotting is diabolical but she’s not the only one manipulating events & sometimes even her best-laid plans are defeated by events beyond her control. Hulot & Crevel are very comical in their self-satisfied preening & posturing. They imagine that Valerie & their other mistresses love them for their good looks & fascinating conversation. They have no problem deluding themselves, even when they discover that Valerie has been teasing them both. Valerie takes to the role of courtesan with ease & her ability to control her situation is remarkable. When her Brazilian nobleman returns unexpectedly, she is entertaining Hulot, Crevel & Wenceslas, none of whom know that the others are sharing Valerie’s favours. She manages to step through several minefields & leaves them all believing that she loves only them. This is such an entertaining novel. I admired the virtuous characters & was amazed by the resourcefulness of the amoral ones. I’ve enjoyed reading Balzac & I know I’ll be reading more of his novels before too long.
Posted by lyn at 1:15 PM